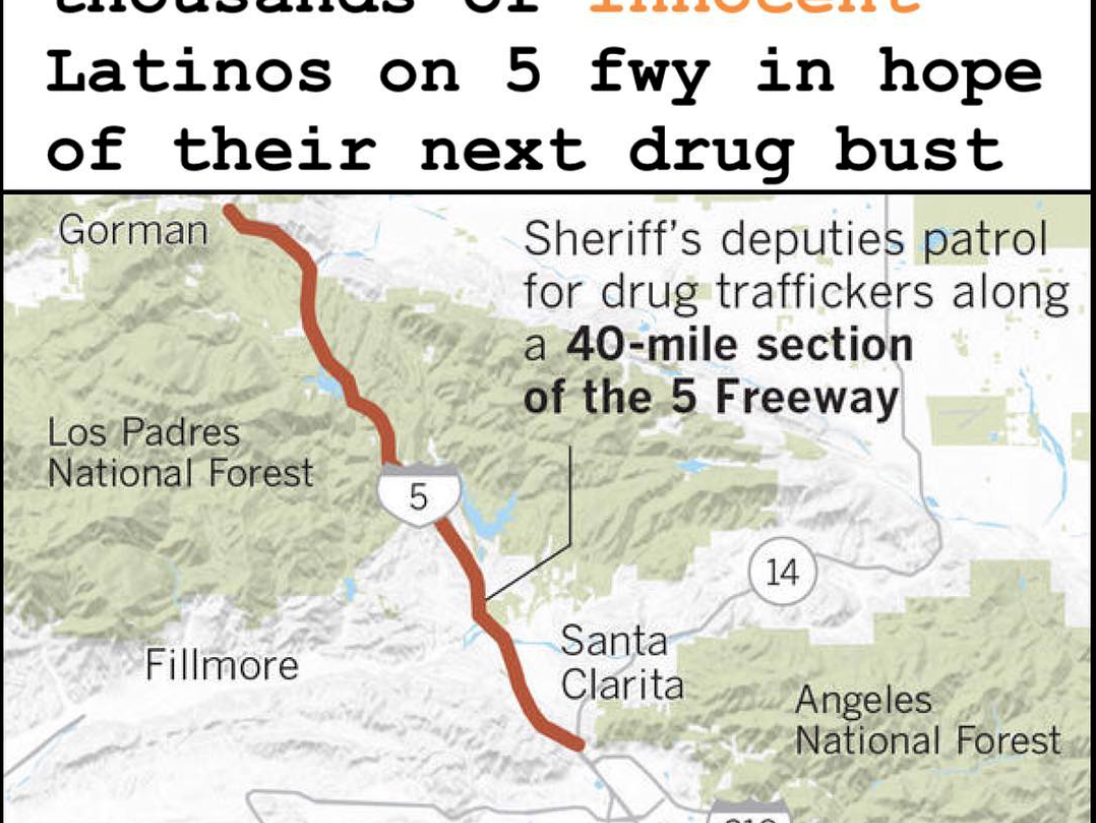 A team of Los Angeles sheriff’s cruises the 5 fwy, stopping motorists on the Grapevine in search of their next big drug bust…

They’ve worked the mountain pass in Southern California since 2012 and boast a large haul: more than a ton of methamphetamine, 2 tons of marijuana, 600 pounds of cocaine, millions of dollars in suspected drug money & more than 1,000 arrests.

But behind those impressive numbers are some troubling ones.

More than two-thirds of the drivers pulled over by the Domestic Highway Enforcement Team were Latino, according to a Times analysis of Sheriff’s Department data. And sheriff’s deputies searched the vehicles of more than 3,500 drivers who turned out to have no drugs or other illegal items, the analysis found. The overwhelming majority of those were Latino.

Several of the team’s big drug busts have been dismissed in federal court as the credibility of some deputies came under fire & judges ruled that deputies violated the rights of motorists by conducting unconstitutional searches.

The Times analyzed data from every traffic stop recorded by the team from 2012 through the end of last year — more than 9,000 stops in all — & reviewed records from hundreds of court cases.

Latino drivers accounted for 69% of the deputies’ stops. Officers from the CHP, mainly policing traffic violations on the same section of freeway, pulled over nearly 378,000 motorists during the same period; 40% of them were Latino.

Two-thirds of Latinos who were pulled over by the Sheriff’s team had their vehicles searched, while cars belonging to all other drivers were searched less than half the time.

Three-quarters of the team’s searches came after deputies asked motorists for consent rather than having evidence of criminal behavior. Several legal scholars said such a high rate of requests for consent is concerning because people typically feel pressured to allow a search or are unaware they can refuse.

Though Latinos were much more likely to be searched, deputies found drugs or other illegal items in their vehicles at a rate that was not significantly higher than that of black or whites..

View all posts by Sennett Devermont →