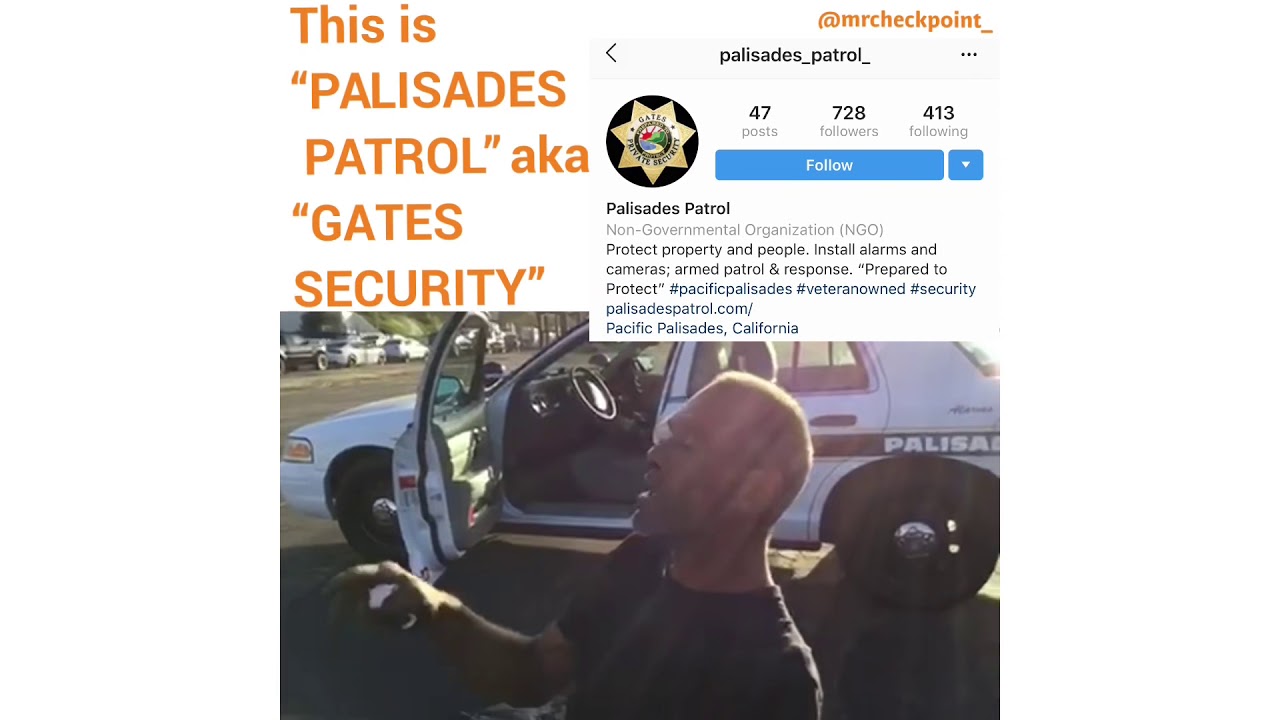 I also spoke on the phone with a representative from the BSIS (Bureau of Security and Investigative Services) who confirmed that Gates Security has had an expired license since October of 2018 for being a private control operator, which allows them to even security guards, as they explained and I understood it.

Legal disclaimer: Eveything below has been submitted or shared by the public and nothing is deemed as factual. Below is the alleged details. Many people reached out who have seen, interacted with, or even claim to worked at this security guard company, known as Palisades Patrol.

If this video outraged you as much as it did me here are some things I am going to do that you can too.

STEP 2: You can feel free to copy and paste the email below with all representatives I felt were relevant in knowing what took place. If you would like to edit or add anything, that is totally up to you.

REQUESTING INVESTIGATION OF CRIMINAL ACTS BY EMPLOYEE OF SECURITY COMPANY

I have witnessed a video; https://www.instagram.com/p/Bsnwa2eHztq/that was taken in 2018, exact date is reported to be 9/19/18 at 7:36 am at Gladstones parking lot off Pacific Coast Highway in the Pacific Palisades, LA County,  between the alleged parties “Jimmy” and a security guard who has been reported to be Eric Fine who works for “Palisades Patrol“,  whose parent company is Gates Security also known as “Gates Security Systems” where they have 6 current License numbers and 4 Expired License numbers with the Department of Consumer Affairs. The owner and founder is Scott Wagenseller according to their website, who also owns Palisades News.

It is my opinion, that the security guard assaulted and falsely imprisoned the one legged individual in a wheelchair who seemed incoherent. I also believe after watching video and listening to the audio the security guard is impersonating an officer. It was reported by multiple parties after the arrest “Jimmy” was taken by Los Angeles Fire Department to a hospital to be treated for injuries from this arrest.

Some quotes from the security guard alleged to be Eric Fine from the video are as follows;

“Now you are gonna go in handcuffs, put your hands behind your back.”

As the man was screaming on the ground laying on his stomach arrested, the security guard says, “keep screaming… Jimmy, listen to me, shut your mouth… I am not going to play games with you, you don’t fucking pull this shit in my town shut your mouth…”

“You were given every opportunity, now I am going to solve it my way and you are going to fucking go, PERIOD.”

“Today you are going to go to jail…” When Jimmy said, “for what?” I am not going to keep repeating myself because you are to fucking stupid to listen”.

“I have to stop what I am doing, get off the phone with my fucking girlfriend, and come down here and deal with you, so now you are going to go to jail.. say ok, (Jimmy nods) say thank you (Jimmy nods), you’re welcome”

If the Security Guard is confirmed to be Eric Fine, it is my opinion he should not only be fired, but charged with assault, false imprisonment, and impersonating a police officer. Anticipating a timely response by email to Sennett@mrcheckpoint.com.

Thank you for your time,

STEP 3: You can also leave Gates Security a review on yelp, and facebook, and their second facebook page

STEP 4: How to File a complaint with the Department of Consumer Affairs

STEP 5: We can contact and show these videos to Gladstones (310) 454-3474 and any other business, apartment, condominum, or house that is or contemplating using Gates Security / Palisades Patrol.

STEP 6: If you see JIMMY in Palisades Park or on Pacific Coast Highway, he should know that this video has been made public and the people are with him. It is my opinion he has a good lawsuit for what has occurred to him.